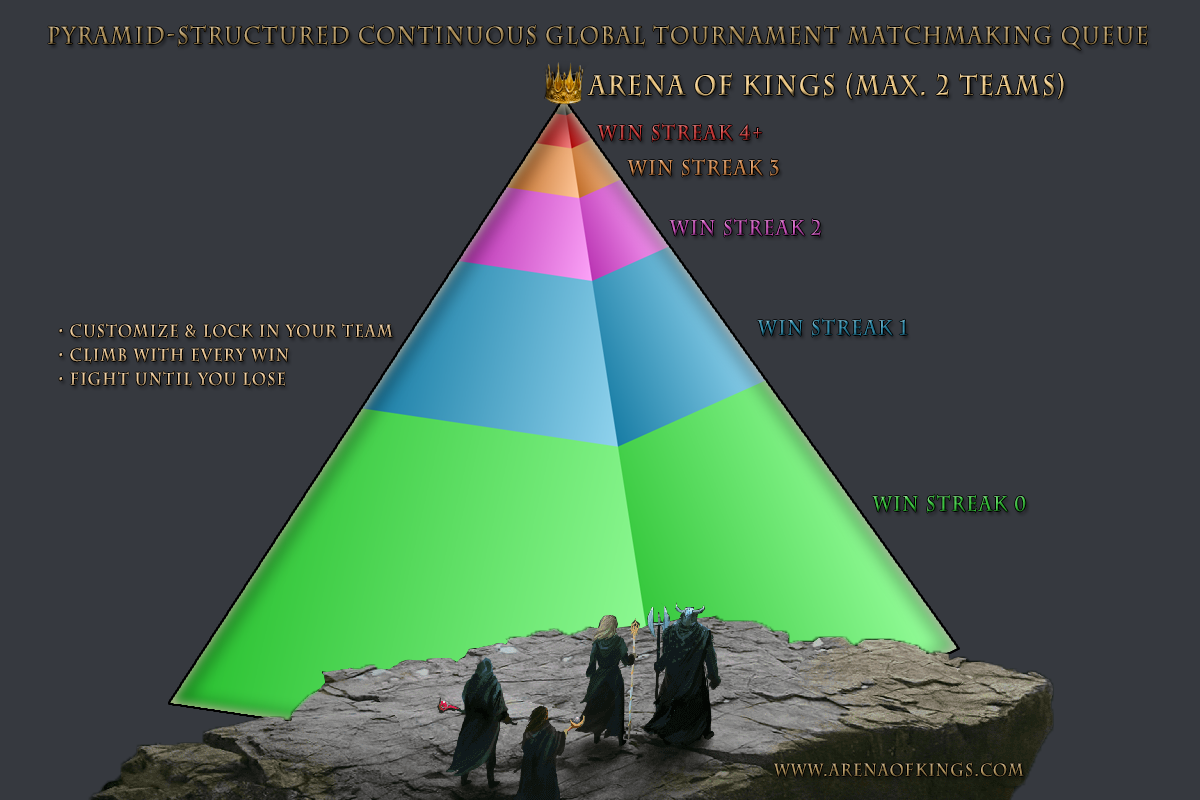 All matchmaking battles (3v3) take place in a King of the Hill style game mode. By winning a game, you will permanently gain Fame and collect Bounties from your fallen opponents, all while ascending to the next stage of the pyramid to reach the Arena of Kings.

The two teams with the highest bounties fight at the top of the pyramid in an exclusive battle to claim the Arena of Kings. This special arena is globally exclusive to the two teams competing on it at that time. Winning a battle in the Arena of Kings yields tremendous rewards and your party members are globally announced to the world’s chat system as a token of your victory.

Losing a battle in Ascension will reset your party’s win streak + bounty (you don’t lose Fame or Silver when defeated) and you will be bounced back to the Lobby. While your team is playing in Ascension you cannot swap out any spells. Changes to your Spell Bar can only be made in the lobby screen, where your team can make adjustments then jump right back into the action when ready. Upon queueing for Ascension your party will be placed at the bottom of the pyramid since you’re coming in with a fresh “run”. 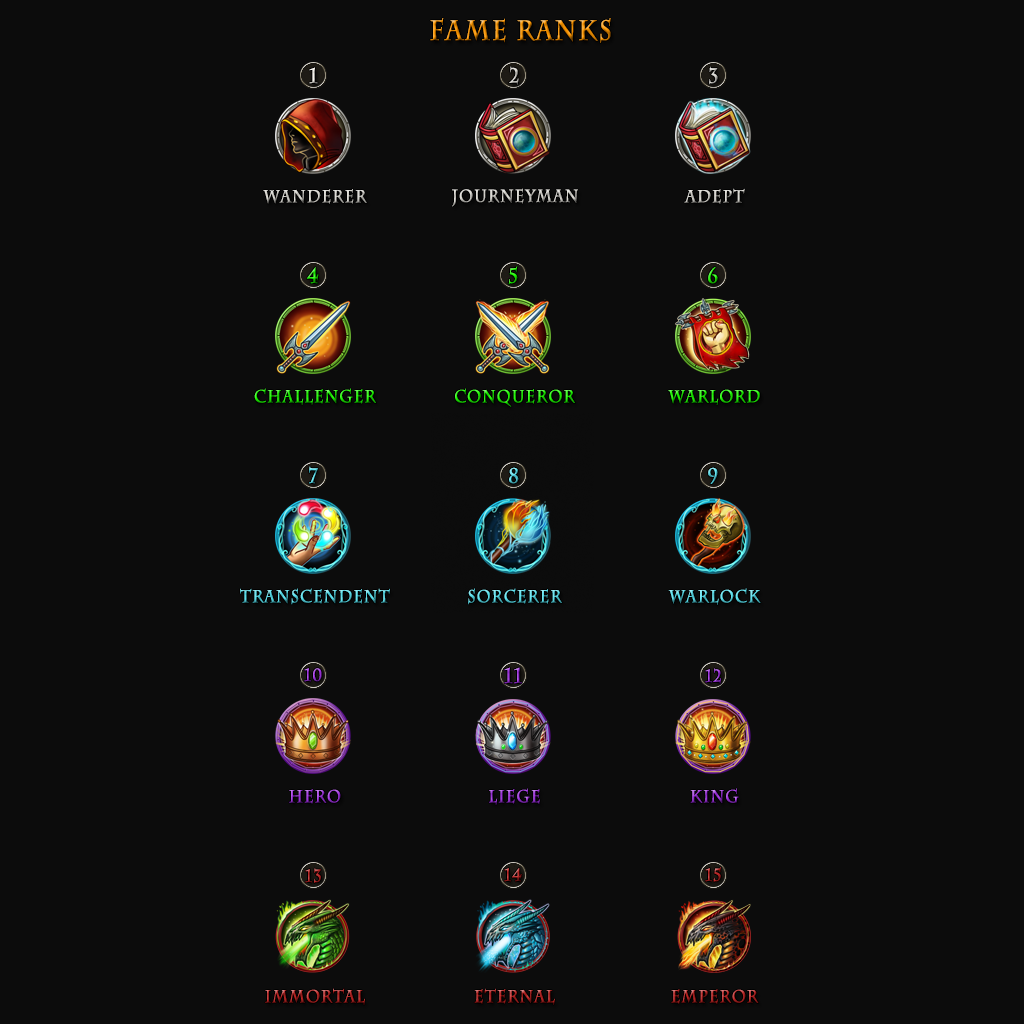 Permanently gain Fame for winning a battle in Ascension. The amount of Fame rewarded increases proportionally to your party’s win streak. Fame Ranks are automatically awarded (based on total Fame) upon reaching pre-set milestones. For example, (Fame Rank 2) Journeyman unlocks when reaching 25 Fame. You can never lose Fame.

All Fame Ranks can be downloaded here.

• Sudden Death no longer ticks damage on the first 2 stages. Damage amplification increased per stage by 5%.

• Poison can no longer be removed as a slowing effect.

• Annihilate no longer deals 5% of targets max health as damage. now deals 1.5% max health for each Status Ailment on target enemy. If used while in Stealth deals 200-400. No longer is a guaranteed critical strike when used out of stealth.

• Daze Stealth bonus now stuns target for 2.1 – 3.1 based on how long Stealth has been active.

• Stealth has been changed to increase the effectiveness of abilities that are benefited by Stealth by 12.5% every second the Assassin was Stealthed. Stealth now breaks on receiving 500 damage (down from 1000). Cooldown reduced from 20 to 15 seconds.

• Temple Strike Stealth bonus now Incapacitates target for 2.6 – 3.6 based on how long Stealth has been active.

• Sprint speed bonus reworked to 25% fading haste over duration. Healing increased from 796 to

• Exhaustion reduces power by 3% every second and applies a 90% fading snare. Lasts 10 seconds. Cooldown reduced from 18 to 5 seconds.

• Aegis has been reworked. Now provides immunity to the next incoming crowd control spell and reduces all damage taken by 10%. Lasts 8 seconds. Cooldown reduced from 30 to 20. Instant cast and usable on allies.

• Dream of Prosperity proc delay added (300ms internal cooldown). No longer has a minimum damage threshold to proc a bounce. Max range reduced from 100 to 65 yards. Healing done increased from 926 to 1261.

• Chaos Wave cooldown increased from 0 to 25 seconds. Cast time reduced from 1.25 to Instant. Now applies Fear for 2.8 seconds. Heals the Nihilist for 100% of the damage dealt.

• Infuse bonus healing per Orb reduced from 40% to 20% (effectiveness reduced by 4% for each additional Orb active).

• Orb Of Absolution cooldown increased from 8 to 12 seconds.

• Orb Of Replenishment cooldown increased from 1 to 6 seconds. Duration reduced from 20 to 8 seconds.

• Orb Of Smoke cooldown increased from 6 to 8 seconds.

• Orb Of Wisdom cooldown increased from 16 to 18 seconds.

• Rockslide radius reduced from 20 to 18 yards.

• Siphon Mana tooltip error: Says it removes 8% of current mana every second. (could be 0.8%?)

• Your team can only have one orb type active at a time.

• Angelic Strike has been reworked: Cooldown reduced from 12 to 0 seconds. Now has a 15% chance to apply 1 of the following: Stuns target enemy for 0.8 seconds. Mana cost increased from 220 to 250 Heals you for 5% of your maximum health, deals 585 true damage.

• Armageddon: Fixed a bug causing Armageddon to not apply burning.

• Transfer life no longer applies a buff. Now Heals for an additional 187 when cast on yourself, otherwise transfers 3% of current health to target ally. Mana cost increased from 320 to 335.

• Counterspell cast range reduced from 80 to 65.

• Shock Nova cooldown increased from 2 to 5. Shock is now guaranteed to apply.

• Volcanic Eruption now only applies Stun to targets that are Burning. Stun duration increased from 1.0 to 1.2 seconds.