• All arenas now have a day and night cycle!

• Bridge bottom half now has collision, no more getting stuck on the railings!

• Night version has lit torches. Standing too close to them will occasionally Burn you (for 3 seconds)!

• The large trees in the top left/right corners have been smoothed out, should no longer feel exploitable.

• Rocks and pillars have had their layering fixed.

• Altar line of sight has been smoothed out, should no longer feel exploitable.

• Large pink carpet has been replaced with a darker one!

• You can no longer run by the bottom wall, which was overlapping with the player UI.

• You can no longer run on top of the fence by the graveyard.

• Buffs and Debuffs you apply are now displayed as tiny icons on player nameplates. All Status Ailments icons are always displayed. 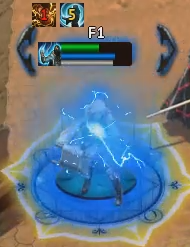 • Annihilate bonus damage per Status Ailment reduced from 2% to 1%. Now always procs Poisoned Blades (guaranteed application of Poison and Infection). Note, the tooltip has not yet been updated to reflect this change.

• Remedy amount healed on cleanse increased from 150 to 423.

• Cleanse amount healed per debuff increased from 288 to 456.

• Orb of Absolution now also heals for 218 when cleansing any debuff.

• Purify: this spell had some bugs. To clarify, now the Buff cleanses 1 Status Ailment and 1 Debuff every second, healing for 365 for each Effect cleansed. Fixed a bug that prevented the cleanse to provide the proper healing on the ticks.

• Vigor amount of energy restored increased from 10 to 40.

• Hobbling Arrow has been reworked and renamed to Twisting Shot.

can be used while moving.

• Gospel of Purity cooldown reduced from 16 to 14 seconds, no longer heals every second. Now always applies the buff.

Making the majority of Magic Missiles damage come from the Freeze component didn’t play well – if the target was Frozen, it would usually break by the time the Missiles came. Instead, we’re reverting the damage values back to 8.1.0.0 and adding a small bonus for hitting Frozen targets.

• Magic Missiles bonus damage when frosted reduced from 780 to 748.

• Changing directions with mouse now updates for other players.

• Informational tooltips have been added in some screens.

• Fixed a bug that caused Amalgamation to do nothing.

• Fixed a bug that caused Orb of Smoke to make the opposing team unkillable.

• Fixed a bug that caused Whirling Knives to sometimes not be castable.

• Fixed a bug that caused Elder Spirit wolf to sometimes not be castable.

• Fixed a bug that caused the combat text on Karma to appear as if it were healing enemies.

• Fixed a bug that caused movement to not update.

• Fixed a bug that caused Orb buffs to persist after the Orb was destroyed by another player.

• Fixed a bug that caused some slows/roots to not be cleansable/trinketable.

• Fixed a bug that friend requests to not be sent.