• Automated in-game tournaments are implemented. Teams can view and inspect upcoming tournaments in the E-Sports panel of the Lobby. To register for a tournament you must also be in a party with members of one of your Arena Teams. The default format is as follows:

– There are 2 minutes between every game (unless both teams Ready before that). During this time both teams can make any changes to their composition. After 2 minutes both teams are forced into a game.

– Every game is played on a random arena every time (possible to play the same map twice).

– After every game, both teams are sent back to the Lobby and can make any composition changes (winners and losers). Rinse and repeat until a team has won 5 total games. 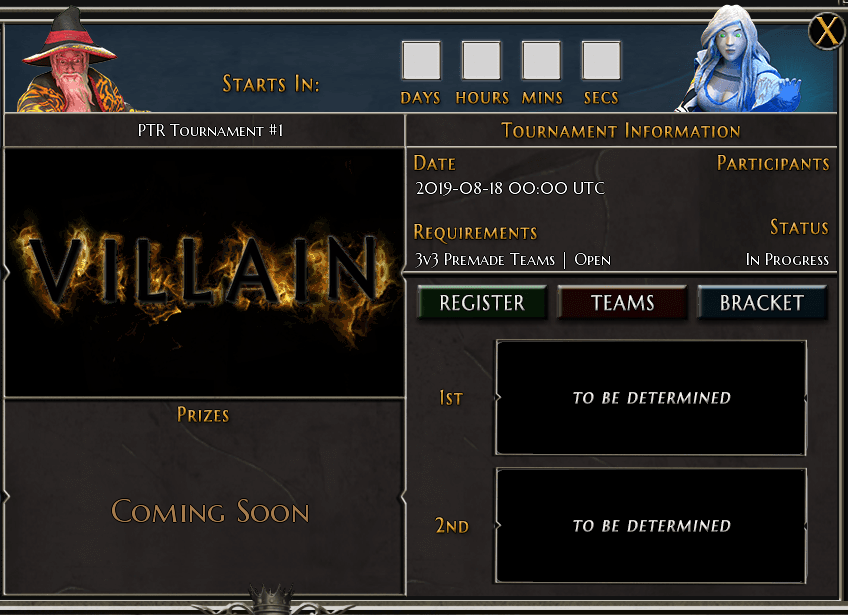 • Sudden Death durations have increased from 15 to 20 seconds. The new values are:

• The following Area of Effect Zones now tick when created:

Acid Rain, Armageddon, Eye of the Storm, Pool of Souls, Quicksand and Rain of Arrows.

• Fixed a bug that caused Buffs, Debuffs, and Status Ailments to not tick on their interval when reapplied on that same frame. This was most commonly reproduced by Area of Effect Zones that reapplied an Effect every second (ex: Armageddon applying Burning was not dealing Burning damage every tick).

• Shroud cooldown increased from 18 to 22 seconds. Tooltip has been updated to better explain the cleansing mechanic.

Our vision for the class fantasy of Champion is multifold. We want players to be able to customize a solid consistent damage dealer that is able to support its allies. We also want players to be able to customize a relentless attacker that unleashes menacing damage if left unhinged. These playstyles are different and we want to leave that up to the player to decide how they want to customize their spell bar. What we don’t want is a Champion with a spell bar containing only crowd control abilities (Charge, Coward, Crushing Blow, Piercing Dagger, Whirlwind). This is not our vision for the class, and it was restricting how much damage we could give Champion.

TLDR; We’re reducing some of the CC and as a result, are unlocking the damage potential that the mighty 2-handed sword all Champions wield.

• Whirlwind has been reworked. Now creates a Whirlwind around the Champion for 3 seconds, dealing 665 physical damage every second to enemies within 22 yards. The Whirlwind moves with the Champion.

• Symbiosis has been reworked. Now heals for 471 every second. The amount healed is reduced by 54 per tick.

• Ritual radius increase from 60 to 80. Amount of maximum health restored reduced from 2% of missing health to 1%.

• Astral Shock now applies the debuff for 6 seconds if successfully interrupting an ability, otherwise applies it for 3 seconds.

• Divination when used to empower BLessing Sun and Moon increases armor and duration by 20% (in addition to also healing 20% more per tick).

• Divination when used to empower Blackout no longer grants mana equal to the amount of players feared. Now duration increased by 20%.

• Divination when used to empower Temporal Barrier increases the duration by 20% (in addition to also increasing the Shielding by 20%).

• Divination tooltip fix (before said 25% empower when it actually did a 20% empower).

• Light’s Wrath was (and still is) applying Hobble (not in tooltip, updated to include it now). Duration of Shock and Hobble reduced from 3 to 2 seconds.

• Orb of Absolution amount healed increased from 218 to 436.

• Crusader’s Fury was proccing 120 extra damage per stack – that has been fixed (bug fix).

• Heaven’s Guidance amount of mana returned reduced from 120 to 60.

• Transfer Life now hurts you for 8% of current health instead of healing you for the amount (bug fix).

• Truth amount of mana restored increased from 5 (allies) and 10 (self) to 6 and 12 respectively.

• Volcanic Eruption no longer applies a .2 second Incapacitate every eruption, instead applies Burning for 1 second. Damage increased from 736 to 894.

• You can copy and paste to<->from text fields now.

• Fixed a de-sync that occurred when a player used Charge, Crippling Slash, Deaths Grasp, or Empowered Slash on a rooted player.

• Fixed a bug that caused auras to render the duration as 99999. Auras now no longer display their (infinite) duration.

• Critical bugs involving balance are noted in the class sections above.

• You can no longer be invited to an Arena Team if you have no available Team slots.

• Fixed a name display bug when inviting a player that has no available arena team slots.