• Items with low rolled mods are now colored in gray instead of white. This is to improve the readability of item tooltips overall, and to help better recognize low quality item rolls. 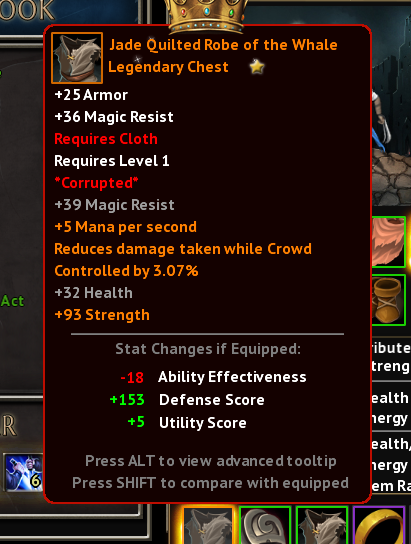 • Puncture duration reduced from 10 to 8 seconds.

• Shadow Walk damage amplification reduced from 8% to 4%. Now applies to all damage sources instead of just the Assassin’s.

• Whirling Knives cooldown reduced from 8 to 0 seconds. Energy cost increased from 40 to 50. Base damage reduced by 20%. No longer generates Combo Points.

• Whirlwind now also applies Bleeding for 2 seconds. Base damage slightly increased. Cooldown increased from 16 to 30 seconds. Whirlwind should be more of a scary cooldown when used instead of automatic occasional dps.

• Remedy cooldown increased from 12 to 15 seconds.

• Inflame now has a 20% chance to cause Burning for 1 second every tick.

• Parasite now steals life equal to 3% of max health every second. The amount of damage taken when dispeled has doubled.

• Pool of Souls tooltip fixed – it does not increase Power for standing in it. Overly encouraging clumping makes gameplay more messy.

• Mind Leech mana cost reduced from 265 to 235. If dispelled now deals moderate damage to the dispeller. Also applies a stack of Gloom if you have Dark Inoculation.

• Purify cooldown increased from 9 to 11 seconds.

• Rain of Arrows cooldown increased from 12 to 15 seconds.

• Geyser has been reworked. Now is an Instant cast and ignores global cooldown. Deals moderate damage and applies Chill and Freeze to all enemies for 2 seconds at your cursor’s location. Cooldown increased from 12 to 25 seconds.

• Fixed a bug that caused a Server crash related to a user logout.

• Fixed a bug that caused a Server crash when right clicking an item from Stash. Equipping from Stash is now working.

• Fixed a bug that caused players to automatically receive a Satchel of Treasure upon leaving the Training Ground.

• Underworld Armor was not restoring health every second.