• Items now have a Sell Value to a vendor. (Right click to sell, with the Vendor page open)

• There is now a loot bag cursor displayed when the sell feature is available.

• Buyback of your last sold item is now available at Adali.

• Items now display a Star to indicate the Item Tier of the Base. For example, all level 1 items are Tier 1 base so they will display 1 star. 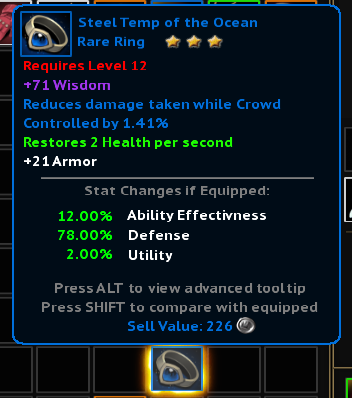 • There is now an item glow on hovered items for the equipment slot on which it can be equipped to.

• Chat now maintains and reconstructs message history so messages sent during a game or while in the lobby are not lost when transitioning to a new screen.

• Cleaned up a lot of interface elements and added polish. Some elements were rendering on the incorrect layer or through other UI elements.

• New Item keybinds: Right click to equip/unequip an item from Inventory or Stash. If the Vendor is open, Right click will sell the item.

• Hovering over Trinket of Resolve in-game now displays a tooltip.

• Poisons are now included on all Assassin Weapons – always 30% chance to proc.

• Feedback added on items now inform the player that you cannot equip items in the middle of a game.

• Plate classes had slightly lower armor than intended. The armor values for Champion and Paladin have slightly increased.

• Puncture duration increased from 6 to 10 seconds. Damage per tick reduced to compensate.

• Divination mana gain reverted back to 200%.

• Glimmer of Light causes Enlightenment to make your next Divine Light also heal for 10% more.

• Fixed a bug that caused some server feedback chat messages to not be displayed.

• Fixed a bug that caused the Party chat to be filled with ‘invisible’ message notifications.

• Fixed a bug that caused players to drop additional items if they left the game.

• Fixed a bug that caused deleted characters to still appear as a player in the world channel.

• The X button on Adali now closes the Vendor.